‘This is a Democracy’ -  Miami’s Black Republicans Feel Shut Out
(text and photos by J. PÉREZ) 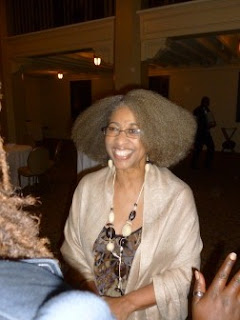 What do James Weldon Johnson, Zora Neale Hurston and current Florida Lieutenant Governor Jennifer Carroll all have in common?   The same thing as 7,746 people in Miami-Dade County:  they are all Black Floridians who also happen to be Republicans.   That begs more questions:  Who are Miami-Dade County’s Black Republicans, why are they Republicans, and are they really “Black”?  After all, with a Black Democrat serving all of the United States as President, does being Republican make one “less” Black?

Ted Lyons, for instance, has been a registered member of the “Grand Ole Party” since 1978.    A proud graduate of Florida’s only public historically Black college, Florida A&M University, Lyons describes himself as “one of the happiest persons in America to have a black family in the White House.”  And he knows a little more about the White House than most:  Lyons served in the federal government for eight years during the Reagan administration as did the late Arthur Teele, who was another prominent Black Republican in Miami after finishing his tenure in Washington, D.C.

For Lyons and others, the decision to be Republican or even just the decision not to be a Democrat should not even be an issue.   “We have to participate in both parties,” says Lyons, who is currently serving as the public relations chair for the Miami-Dade County Republican Party (which currently numbers just over 371,000 members across the county).  T. Willard Fair, longtime chair of Miami’s Urban League says plainly, “I sympathize with what is best for my community.”

The notion that being a Republican undermines one’s “Blackness” is one that rankles many.  Sitting in her living room, abundantly adorned with artwork from across the vast African continent and a with a biography of Nelson Mandela on her coffee table, Barbara Howard says she has been painted as a “persona non grata…public enemy number one” in the community.   “Why do you call me names?  I thought we were free,” asks Howard, who came of age just outside of Montgomery, Alabama as that city was becoming ground zero for the expanding civil rights movement in this country.

It was not so long in our country’s history that all of the states south of the Mason-Dixon Line (including Florida) were Southern Democratic strongholds, controlled for generations by the so-called “Dixiecrats.”   Men like Orval Faubus in Arkansas, James Eastland in Mississippi, and George Wallace and Bull Connor in Alabama were proud and prominent members of the Democratic Party.  Conversely, people like Ida B. Wells, James Meredith, Frederick Douglass, and Martin Luther King, Sr. were just but a few of many Black Republicans across the country.

Fair, Howard, and Lyons all point to synchronicity of views on families and family values with the Republican Party as big reasons why they each believe that the GOP has the answers to what is ailing Black Miami.   “There is nothing broken in Liberty City that can’t be fixed with whole families,” says Fair - who is long-time registered independent voter.   Ironically, Fair’s statement echoes a very similar sentiment voiced decades ago by T. R. M. Howard who, in spite of being a Black Republican, was credited as being a powerful mentor for both Medgar Evers and Fannie Lou Hamer.

Also important to many Black Republicans is need for political plurality as a way to ensure that the needs of the Black community are not subject to whoever is in office.   Likening the long-standing “Blacks are automatically Democrat” paradigm in the American political scene to “a beauty contest,” Lyons argues that “there is no real debate in our community – we’re just supposed to vote democrat.”

“This is a democracy, a system that allows you to speak your mind,” said Lyons.

In article published a few weeks ago in the Miami Times, H. T. Smith said  that “Blacks’ relationship with the [Democratic] Party is akin to a domestic violence situation — the Democrats continue to abuse us but we insist on staying with them and remaining fully committed.”  Fair believes that this collective relationship with the Democratic Party is rooted in “insecurity.”

“Racism - in practice - dehumanizes, therefore Blacks make decisions based on insecurity which is rooted in a lack of acceptance,” said Fair.

Additionally, the potential for alienation from friends, relatives, and neighbors adds to this dynamic.  “There are tens of thousands [of Blacks] that subscribe to Republican philosophy but are afraid to say so,” continued Fair.   Lyons and Howard each believe that this ideological prejudice denies Black Republicans equal voice and thus undermines American democracy.  “We need to be able to share our opinion,” said Lyons, including Black-owned newspapers that “don’t allow Black Republicans to have their say on a regular basis.”

For many non-Democratic Black citizens of Miami-Dade County, the real issue centers on common issues for all.  “At the end of the day, what is in the best interest for Black folks?” asked Fair.