A summer afternoon just off of Little Haiti’s main drag finds children engaged in an artists’ round table discussion and other kids putting together remote control robots. As small hands and growing minds brainstorm how to make their 21st Century Tinker Toys motor across the carpeted floor of the modern classroom, the children are oblivious of the storm clouds of uncertainty gathering over the Little Haiti Cultural Center, where all of these activities and more are taking place. 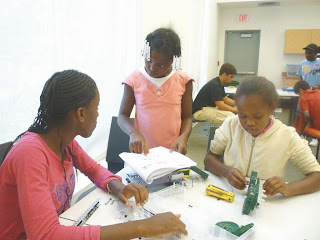 The Little Haiti Cultural Center is a brand-new jewel of a public facility originally proposed by late Miami City Commissioner Arthur Teele located just off the intersection of NE 2d Avenue and 59th Street.  With one year officially behind them, the LHCC has started making a mark on Miami’s cultural scene, providing a community venue and voice for both professional and aspiring artists. While that might be true from a public standpoint, the center and its staff are having to deal with concerns in Little Haiti that the LHCC is not directly serving the needs of its residents. And then there is the not so discreet behind-the-scenes plans to turn over control of the Center to outside entities.

In a small office that overlooks both the Little Haiti Cultural Center’s colorful courtyard and the lobby outside of its cozy yet popular amphitheatre (LHCC staff are proud to point out that Vice-President Joe Biden has already graced the amphitheatre with his presence) sits the desk of Anita Darbonne, the City of Miami’s Dance Coordinator. The desk and office of Darbonne are always easier to find than Darbonne herself. An energetic and graceful woman who has thrown herself into making sure the programs at the center are a success. Darbonne arrived at the LHCC shortly after it opened with experience not only as a professional dancer but also as the head of a successful private dance company in California.

When  Darbonne  started at the center, she was surprised to learn that the city had no dance program.  “Miami offers so much culture, it has so much to offer,” she says, “I was blown away.”  Darbonne, a Miami native who grew up within walking distance of the LHCC in the Sabal Palm neighborhood, sees the potential and envisions a day soon – within the next three years – when an internationally-recognized dance company will be based at the LHCC.  With that vision she sees the feasibility, the necessity of a place where people from throughout Miami can come together to learn about each other through the nurtured interchange of cultural expression.  “My thing is bringing the people together so they can learn to respect each other a whole lot more,” says Darbonne.

That vision is shared by the City of Miami’s Parks and Recreation Department which is the department that oversees the LHCC.  “Everything we do,” says Lara DeSouza, spokesperson for Parks and Rec, “our mission, is leisure and recreational opportunities that are available for everyone.”

And that brings us back to the center where the going has been difficult. While the center has been used for events that have been well-attended, most if not all of those events have been “rentals” which are used by specific – usually wealthier – people in the community and most if not all of those rentals are either private affairs and are too expensive for many local residents to attend. 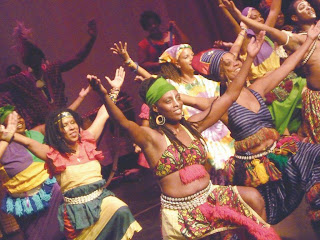 While rentals have a place at the Little Haiti Cultural Center, the mission of the LHCC or any other community-based, tax-funded cultural center is to provide established programs for residents of the immediate and surrounding communities.  “Programming” provides more community access than rentals which, in essence, take up community space and resources.   This year alone, the LHCC has offered programs in dance, photography, television production, French language instruction, and so on.  The programs for youth have been for children aged 6 to 16 and they have been free of charge with families paying only a one-time $20 registration fee to help defray administrative costs (which is always important for a municipal entity in a city that is so deeply in debt that it has been on a hiring freeze for all of the current fiscal year and has also enacted a purchasing freeze since last winter).

So how was the community participation for these events so far? According to Darbonne, attendance was a big concern up until the last moment. With no money in the budget for marketing, there was no effective way of letting the community know about any of the programs (LHCC staff have had to rely heavily on “guerrilla marketing” tactics like email blasts and face-to-face outreach at local businesses and schools).  Ultimately, the classes were filled up but all were “last second maxes.” The LHCC was also hamstrung by not having a transportation budget which limited participation in the programs to either children who live close enough to the center to walk safely or by children whose parents have the means and time to drop off and pick up day camping children.

This brings us back to concerns within Little Haiti that that the Little Haiti Cultural Center is a community jewel usurped by outsiders. This concern dates back to even before the LHCC opened its doors. Lucie Tondreau, a local activist and attorney, says that many in the area were upset that Cuban contractors were employed to build the center structure instead of Haitian workers.

Center staff point out that the LHCC’s mission focuses on expressions of Afro-Caribbean art and culture, not exclusively Haitian yet they also state they have gone out into Little Haiti speaking with business owners and students in area schools.  The obstacles of perceptions and reality are ones that Darbonne and Rasha Cameau, Director of the Center, are confident will be reconciled soon.   For example, the perception is that Haitian youth want to learn Haitian folkloric dance.  The reality, says Darbonne, is that many of the children are saying that they want to learn ballet or jazz.  Of course, for children who are not Haitian, the interest in and desire to learn about contre-danze, rara, and other dance styles is something that can be met at the LHCC.  DeSouza adds that the LHCC is a “multi-tiered center [which] is a great destination no matter who you are.”

But, back to the ongoing debate between programming and rentals.  “Programming to me is more important than rentals,” says Darbonne who points out that, via a regular dance program at the LHCC, children who are being home-schooled can earn physical education credits as just one example of how a truly viable cultural center in the community benefits the community. 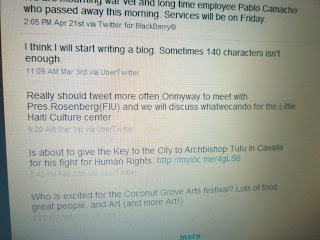 But with the aforementioned city-wide budget crunch, how can the LHCC keep the programs it has now afloat, much less build itself into a vibrant and celebrated cultural center?  Cameau, who first started at the City of Miami as an employee of City Hall, says that funding from grants helps as does partnering with local nonprofits.   She would also like to see the development of a sort of booster club as they are called in athletic circles, a ‘Friends of the Little Haiti Cultural Center’.  Such an idea has merit because it can help take some of the budgetary burden off of the City while still allowing the LHCC to retain the artistic control so vital to any respectable cultural center.

That control is in peril as entities outside of the City of Miami municipal government – in both the public and private sector – have their eyes set on being given the keys to the Little Haiti Cultural Center while the city still foots the bill.

On March 1st of this year, Miami Mayor Tomás Regalado posted an entry on his Twitter page that read “Onmyway to meet with Pres.Rosenberg(FIU) and we will discuss whatwecando for the Little Haiti Culture center [sic].”

When asked about Florida International University’s and President Mark Rosenberg’s interest in the Little Haiti Cultural Center, a university spokesperson stated that Regalado “came to us because we put together a Haiti Task Force after the earthquake [in January of this year].”    Rosenberg even visited the LHCC, she said, in late July “just to visit.”  When asked about the recently-installed president of a large state university struggling through a third year of budget cuts affecting programs, faculty, and students going 17 miles east to visit a cultural center during the work week “just to visit,” the spokesperson remarked, ‘it’s his leadership style.”

Interest in the Little Haiti Cultural Center on the part of FIU is particularly interesting given that dance programs at the school were among the first victims of the budget cuts that, according to the Miami New Times, “slashed 38 faculty jobs, shut six labs, and axed 23 degrees because of a $32 million shortfall.”  The Delou African Dance Ensemble (DADE) and FIU Professor Agosto Soledad’s Brass dance company were part of those cuts and were evicted from FIU after having been in residence at the university for some time.

Ironically, both Delou and Brass have found homes at the Little Haiti Cultural Center.

For Soledad, the irony is especially deep. Soledad came to FIU to be a part of a growing dance program in one of the most ethnically diverse areas of the United States only to see the entire dance program terminated and faculty members “dispersed.”  While the budget cuts that exiled Soledad and the rest of the dance program from FIU were enacted under Rosenberg’s predecessor Modesto Maidique, Soledad is skeptical that a new president at FIU will result in a renewed commitment to dance.  “Dance is not really a part of [Rosenberg’s] vision,” Soledad says.

While the mayor is coyly cup-caking with FIU about the Little Haiti Cultural Center, sources indicate that newly-minted City Commissioner Richard Dunn is allegedly in the midst of a courtship with Jean and Emmanuel “Manny” Cherubin (WSRF-AM 1580, WAVS-AM 1170, and TeleAmerica TV) to assume the same privatized takeover of the LHCC that FIU appears to covet.   The deal is allegedly proposed to work like this:  FIU (Regalado) or the Cherubin group (Dunn) would assume management responsibilities over the LHCC but the City of Miami would still be responsible for “big ticket” repairs (broken air-conditioning, faulty elevator etc.).  Thus, the City of Miami would still be paying for the upkeep of a city-owned facility that would in fact be used privately – or so it would seem.

Emmanuel Cherubin was quoted in an article that appeared in the Wall Street Journal almost four years ago that focused on lack of consumer safeguards on local radio stations that “lease” airtime to any one or any business who pays for the airtime.   “Time brokerage” is like a radio version of a television infomercial where listeners think they are listening to a legitimate show with hosts and guests purported to be trustworthy.  Not realizing they are basically listening to a commercial, listeners who fall victim to these tactics have been bilked out of untold sums of hard-earned money.  The article mentions Cherubin in connection with fraudulent programming on leased airtime on a family-owned radio station.  In the article, Cherubin says he “disregarded” the deceptive claims made by lessees to listeners.

Calls to Mayor Regalado’s office, Commissioner Dunn’s office, as well as to the offices of the Cherubins at WSRF radio were not returned.

Not long ago, the mother of a child who had signed up for one of the summer programs offered to children came into the Little Haiti Cultural Center to see Cameau.  When asked if anyone else could help her, she timidly replied, no, she needs to speak with Cameau.  When Cameau returned a few minutes later, the woman explained that her family was having hard time financially and wanted to know if Cameau could refund her the $20 she paid for her child’s registration fees.  Cameau obliged the lady who was very relieved and grateful to have back what may as well have been a million dollars for her.