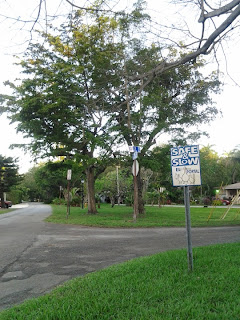 As afternoon shadows lengthened with the setting sun in the hamlet of El Portal this past February 22nd, Claudia Hessel was out for a leisurely stroll with her two children and their two dogs with the sun to their backs.  According to Hessel, “the car came from my back, and I could see the car coming at a high speed.”    Thus began an email sent by Hessel to the Village of El Portal later that evening repeating a call to both the Village and Miami-Dade County to install “speed humps or any other residential traffic control device… for our own protection.”

In fact, the calls to address what Village Manager Jason Walker says is a safety issue date back to 2007 when he sent a letter to Muhammed Hasan, Chief of Miami-Dade County’s Traffic Engineering Division, requesting “a traffic study to determine if speed bumps [were] warranted.”    The letter to Hasan was in response to demands from residents of El Portal’s idyllic Sherwood Forest neighborhood to address mounting complaints about drivers speeding through their quiet streets to get around Miami’s ubiquitous traffic snarls.  Desperate for help, residents contacted County Commissioner Audrey Edmonson and Walker, hence the request for help to address safety.

Initial attempts to install even something as seemingly simple as speed bumps to slow down the maniacal hordes of speeding motorists is not as simple as it used to be.   Several years ago, Miami-Dade County, alarmed at the rising number of almost arbitrary street closings in different parts of the county, moved forward with an ordinance that requires municipalities to justify the installation of “traffic-calming devices” such as speed bumps and outright street closures.  To meet the county’s threshold, Walker contacted Hasan on behalf of the Sherwood residents to voice their opinion on this matter.

In his response letter to Walker, Hasan explained the methodology of the traffic study Miami-Dade County conducted “to determine the feasibility of the installation of traffic calming devices” on three different streets in Sherwood Forest.  The study conducted by the County’s Public Works Department demonstrated that the streets in question (NW 2nd Avenue, NW 86th Street, and NE 85 Street) did not meet the “minimum criteria established for the installation of speed humps.”    In short, there just were not cars going by (tortoise or hare) to merit any measures.

The County did give the Village the option of moving forward with the installation of traffic calming devices provided they conducted their own traffic study that gave credence to the assertions made by some residents that the streets of Sherwood Forest were now hazardous to pedestrians.   El Portal did that, hiring the Coral Gables firm of David Plummer and Associates to get – in effect – a second opinion.    In November 2009, Juan Espinosa, Vice President of Transportation for Plummer, wrote to Walker.   The second report reaffirmed what the County’s report proved:    “none of the residential streets studied meets the threshold” required by the county to even think about traffic calming devices.

These results are all the more telling when one talks to longtime Sherwood Forest resident Auta Davis.   A homeowner in Sherwood Forest since the late 1980’s, Davis told The Biscayne Times that, during the study, neighbors who are in favor of traffic calming devices, drove their vehicles up and down the street in an effort to spike the numbers.     Indeed, while driving eastbound on NE 85 Street towards El Portal’s Indian Mound recently during the height of a weekday morning rush hour, no traffic was seen except for two cars…and a handful of people walking their dogs.

In spite of formal studies that showed that the incident that alarmed Hessel is a statistical exception to the traffic trend, El Portal pressed forward in an effort to do something to help residents of Sherwood Forest feel safer walking on their streets.    El Portal Police set up speed traps but went back to the station house empty-handed after three hours of watching minimal automobile traffic.   The posted speed limit in the area was lowered to an almost school-zone-esque 20 miles per hour.  Also, the Village anted up a few thousand dollars to pay for radar trailer.  There was even talk of giving the NE 85th Street sidewalks.  All the while, Walker continued to press Miami-Dade County to allow El Portal to install at least speed humps in Sherwood Forest.

El Portal’s efforts advocate on behalf of the residents calling for increased safety was admirable especially in light of concerns about speed bumps in residential areas.  For example, in a 2006 memorandum sent to then County Commissioner Carlos Gimenez, County Manager George Burgess wrote that speed humps “reduce the speed of emergency vehicle response times substantially.”     This aspect weighed heavily on the mind of Davis.   She and her husband are retired and she expressed fears about what delayed response time would mean if their house caught fire or worse.   Burgess also cited data that showed a significant rise in accidents after speed bumps were installed “on a street to protect children.” 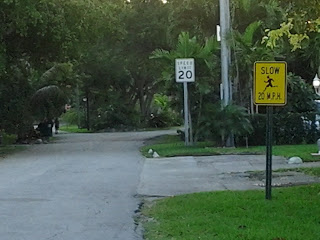 All of Walker’s work, however, paid off when just seven days after Hessel had her brush with a wanton Honda, Walker received word that the County relented and agreed to allow El Portal to install speed bumps.    The elation, however, was short-lived.  No sooner than Walker had shared the good news when the same residents who expressed hope for any answer to their fears about safety decided that – all of a sudden – speed humps were not going to suffice.   “They won’t work,” said Hessel to the Biscayne Times about speed humps less than a month after the County informed El Portal that it could finally move forward with speed bumps to address safety concerns.  What will work?  For Hessel, it is clear: close the street off permanently.

If Walker or anyone else at El Portal’s Village Hall was frustrated with the sudden, far-reaching stretch in the direction of outright street closure after years of almost begging Miami-Dade County for speed bumps, no such emotion was evident.    “The issue is speeding,” said Walker.  “We think that we have adequately addressed that issue.”   Given Miami-Dade County’s disdain for street closures in residential areas and concerns that residents like Davis and neighbor Don Rock have that the already postage-stamp-sized El Portal will snowball into a maze of dead end streets, the shift away from the even unlikely concession of speed bumps towards a push for street closure is puzzling.

Davis, who says she spends most of her days outside in her garden in full view of all that come and go on the street at the center of this unexpected controversy, is bothered by what she calls a lack of “civic-mindedness” on the part of a few relatively recent arrivals to the community.   Recalling the subtle charm of Sherwood Forest that compelled her and her husband to buy a house here almost a quarter century ago, Davis wants to “let everybody enjoy it.”

When asked what she thinks is driving the intensified drive for street closure, Davis thinks it is rooted in a sense of “entitlement.”

Curiously, Hessel herself admitted during her interview with the Biscayne Times that her own home has lost a great deal of value.

Dawn Wellman is a real estate broker and a resident of El Portal.   Wellman, the resident, supports Hessel’s initiative.  She says that the “narrow and wind-y [sic]” streets of El Portal make even driving according to the posted speed limits difficult to steer one’s car safely.  As for the county ordinance governing traffic calming devices and its use, she reasons that “we’re in Dade County but we’re in a little village.”

When asked if the creation of an artificial cul-de-sac vis-à-vis closing NE 85th Street could increase the value of home near the closure, Wellman, the broker, replied solidly, “certainly.”

The Biscayne Times contacted Susan Truzenberg, a broker who works in Coconut Grove (a community whose subtropical ambience and narrow, winding streets are similar to those found in Sherwood Forest) to find out more.    Truzenberg, who does not live in El Portal, was asked the same question as Wellman.  Would a street closure increase property value for homes on the impacted street?   On a scale of 1 to 10, Truzenberg said the benefit would easily be an 8.
Returning to the concerns expressed by Hessel and others for safety on their street in Sherwood Forest, enough residents and Village and County leaders clearly share it.   What is not clear, however, is whether or not the evidence undermining those assertions’ severity plus questions about ulterior motives will yield an outcome that will make Claudia Hessel et al happy as the Village of El Portal and Miami-Dade County move forward – or not – with approved plans to install speed bumps in Sherwood Forest.

Wellman added “I’m for whatever everybody wants to do.”  If only one could figure out what that “whatever” really is.
Posted by Veguero Viajero at 5:30 AM No comments: