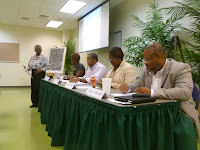 Residents of a large swathe of unincorporated North Central Miami-Dade County are making moves to create a new municipality that will sit nestled at a critical junction of transportation hubs at a time when state and local officials are actively expanding business infrastructure to catapult the area more prominently into international commerce.   For those residents, the incorporation initiative is driven by a need to wrest control of their communities’ economic resources away from downtown Miami in hopes of securing a more stable socioeconomic future for themselves. 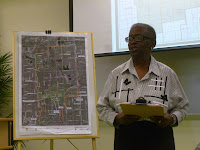 Neighbors and supporters of the North Central Dade Area hosted a conference at Miami-Dade College’s north campus earlier this week to work on “the planning, funding, and implementation” of different activities they feel are necessary to create the area’s newest city.    Gathered at the conference to the discuss the future of the area which is alternately known as NCDA and/or Encida, for a general session, panel discussion, and break-out sessions, were business owners, academics, along with residents.  State Representative Cynthia Stafford (D-Miami), whose constituency now includes many areas of NCDA after recent redistricting, provided opening remarks for the conference. 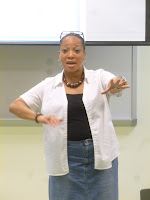 Mack Samuel, who along with Doretha Nichson has been a strong proponent of the incorporation initiative, was excited about the conference.   “It’s an opportunity to engage the community in a conversation that is long, long overdue,” he said.  Samuels said that incorporation boiled down to “remaining as you are or having your own self-determination.”

Nichson and other expressed a sense of urgency for the drive to incorporate.  “Opa-locka is annexing part of this area including Miami-Dade College,” she said and added that Hialeah is also looking to slice off parts of the area for annexation.   “We have to fight attempts to cherry pick our area.” 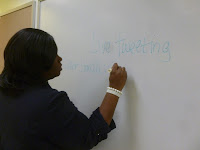 Both Nichson and Samuels see the City of Miami Gardens as a model to follow.  Created barely a decade ago, Miami Gardens was created out a large part of North Dade County that sits on the border with Broward County – and in the midst of a great deal of uncertainty and hand-wringing – and is already beginning to thrive.    Because of that, the conference organizers invited the founding mayor of Miami Gardens, Shirley Gibson, to be a panelist.   When it comes to incorporation, Nichson said that Gibson has “been there and done that.” 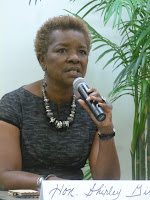 Gibson’s comments to conference attendees were simple yet forceful.   “Stop being afraid of being in charge of your own community.  If you don’t own it now, someone else will later.”

A key item of discussion at the conference focused on education as an investment in the economic prosperity of Encida.    Local business owner Darryl Holsendolph was also a panelist along with Gibson, legendary urban planner Ron Frazier and T. Leigh Toney, the Executive Director for Miami Dade College’s Meek Entrepreneurial Education Center. 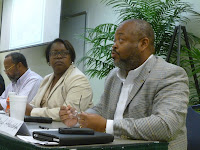 Holsendolph raised the subject of the emerging educational orientation of policy makers in the county as an important part of the future of Ensida.    He said that with the growing push to invest more and more resources into making Miami-Dade County an even bigger player in international trade, the field of logistics management is being prioritized in a very deliberate and dedicated fashion.   He pointed out that local colleges and universities are working with an initiative created by the Beacon Council called One Community One Goal to create degree and/or certificate programs within their curricula to meet this growing area of economic need.   He said that it is imperative that related academic and vocational programs be created and supported within the public schools located in the NCDA, such as Miami Central High and Miami Northwestern High.

Holsendolph and others worry that the failure to include NCDA in academic policy planning and implementation will pose a grave threat to the future of the area. 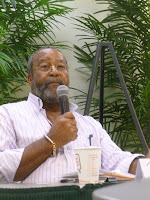 A conference organizer and one of the driving forces behind Encida, Nichson expressed concerns that she has not had ready access to key policy makers.  “I haven’t been able to meet with [Miami-Dade Couty Mayor Carlos Gimenez] since he was elected.”   She added that the Beacon Council was “not responsive. They don’t see us as clients.”

Mayor Gimenez is a co-chair for One Community One Goal.

Nichson cites as an example the absence from the conference of County Commissioners Audrey Edmonson and Jean Monestime, who both represent different parts of North Central Dade County.   The attendance of the conference by Misty Brown and Jordan Ricketts, from Edmonson’s and Monestime’s offices respectively only reinforced the perception for some that, as Nichson said, the Commissioners send staff only “because it is politically expedient.”  Nichson was also frustrated with the lack of “economic diversity” initiatives introduced and implemented by the area’s county commissioners.  “All they do is affordable housing.” 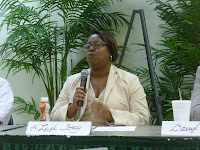 According to 2010 figures, the total number of people living within what proponents call “the North Central Dade Study Area” comes to almost 85,000 people.   African-Americans make the largest percentage of people living in unincorporated North Central with a total of 51,682 people, or 61.2 percent.   The next largest ethnic group is made up of Hispanics/Latinos who comprise over 35 percent (29,891 people). 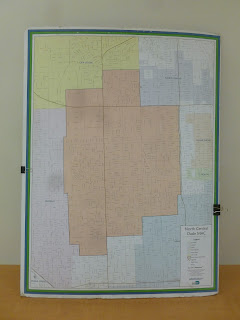 *The read the print version of this article, please click here.
Posted by Veguero Viajero at 5:30 AM

A diversity study commissioned in 2009 by then-Sheriff Al Lamberti found multiple instances of discrimination in hiring practices, promotions, and business opportunities within the Broward Sheriff’s Office.    The 31-page report was never released to the public nor to the members of the fact-finding commission itself.    According to that study, BSO discriminated against women and minorities as outlined in 51 “facts/finding” areas.   That study also made 31 recommendations to address the problems which, according to some members of the panel, have yet to be redressed.

The study found that “diversity and equal opportunity are not distributed evenly and equitably throughout” BSO.

The diversity study was compiled by a panel that was chaired by Dr Henry W. Mack.  According to a member of the panel, anthropologist Roland Foulkes, the Council for Diversity and Equal Opportunity was put together in an unorthodox manner.  “The Sheriff had already chosen Mack to chair” the CDEO, said Foulkes, and Mack, in turn, chose his vice-chair, Jocelyn Carter-Miller.   Foulkes said that the subchairs and bylaws for the CDEO were already decided on beforehand as well.   “It was very different how we were pulled together,” said Foulkes.

Attempts to reach Mack, Carter-Miller, and Lamberti via telephone and/or email were unsuccessful.

What the CDEO found raises serious questions about BSO’s ability to effectively interact with and serve a county that is growing increasingly diverse in terms of both residents and tourists.   For example, the CDEO report said that BSO’s Department of Detention was the agency’s “most diverse unit” yet employees from that department were typically “considered inferior” to personnel from other departments.  The CDEO report concluded that this, in turn, impacts career advancement for many DOD employees.

Also, minimal contracting opportunities were being made available for minority companies with BSO.  The CDEO report discovered that “the BSO Purchasing Bureau does not maintain [a minority business enterprise] database.”

Career opportunities were also found to be lacking.   Among the findings documented by the CDEO, it was pointed out that a demographic-specific recruitment plan did not exist and the ratio of minority “command level” staff was not proportionate to the rest of Broward County.

The CDEO also discovered that the “BSO did not have a definition of ‘diversity,’” said Foulkes. “We gave them one.”

Although the 2009 CDEO commission and study were projects initiated by his predecessor, the findings and recommendations contained therein have strong implications for the current BSO Sheriff.   Scott Israel, who succeeded Lamberti earlier this year, said that a more diverse and inclusive work force is “critically important to me.”  That said, the exact focus of Israel’s interest in leading an agency that “looks like Broward County” is still being developed.  BSO Senior Public Information Officer Keyla Concepción told the South Florida Times that BSO is “reviewing what was in place.”

“Everything is being carefully reviewed,” said Concepción.

Still, both Israel and Concepción were eager to point out improvements.   For example, since he was sworn into office last January, three African-Americans have been promoted and/or named to key roles in the agency.  Colonel Alvin Pollock is now in charge of all of BSO’s Department of Law Enforcement, Major David Holmes supervises patrol operations in the southern Broward, and Colonel Gary Palmer came out of an almost three year retirement to lead the Department of Detention and Community Programs.  Also, William Knowles was promoted to Lieutenant Colonel in charge of countywide services (e.g. services for neighborhoods and youth, special operations, et cetera).

Even the BSO Public Information Office is evolving.   The top two positions in that visible arm of the Sheriff’s Office are held by two women:  Concepción and PIO Manager Veda Coleman-Wright.

Israel is also keeping an eye on the sustainable side of diversity.  BSO is “making a push,” said Concepción to recruit a more diverse applicant pool for jobs in the agency.  “Positions are open.”

In hindsight, nothing ever came of the panel’s work for Lamberti in spite of the findings and a series of recommendations to address the disparities contained in each.

Ralph Rachels, President of the Liberal Black Firefighters Association, is disappointed.   “We never heard anything from that report.  I didn’t see any changes.”

Albert Jones, current Vice Mayor of Dania Beach, was a Broward County Commissioner when Lamberti convened the CDEO in 2009.  He also has unanswered questions about the report that the panel worked on.  “I never got a copy of the report so I don’t know what happened.”

Foulkes said that he “felt used.”

“I haven’t seen a whole bunch of changes.  My disappointment is that they did not follow through.”

Jones described some of the challenges the CDEO encountered while trying to put together the report.   “We were running into interference along the way,” Jones said, “because we were outsiders.”

“We were just community people, volunteers,” echoed Foulkes.  “The committee was a campaign promise. We came in, did our work, and left.”

For Rachels and others, the experience remains a major disappointment.   “That was a waste of time.”

urlink to published article
Posted by Veguero Viajero at 5:00 AM