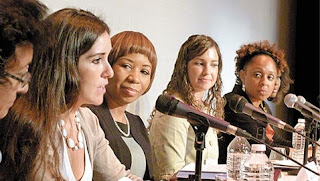 As this current election season heats up with the end of summer, few issues seem to capture the attention of voters like that of healthcare.   A central part of the domestic agenda for the last two democratic presidents, the subject of healthcare reform is already figuring significantly in President Barack Obama’s battle for reelection against Republican nominee Mitt Romney.  With healthcare taking on partisan interpretations, the issue of voters making an informed decision at the ballot box has become even more important than before.

Earlier this week, the National Council of Negro Women brought its National Health Care Reform Tour to Florida Memorial University in the form of both a provider resource fair for area residents and a panel discussion to raise awareness about the Affordable Healthcare Act (ACA).  The importance of such an effort to increase knowledge about what Congressperson Federica Wilson calls “a complicated law” was at the forefront of efforts to inform and discuss ACA in Miami and other cities in the United States tabbed as tour sites by the National Council of Negro Women (NCNW) such as Atlanta, Newark, Albuquerque, and other communities.

Alma Brown, Metro Dade Section President for NCNW, says that the purpose of the tour is to “educate and inform the community about ACA especially about what it means to each person’s rights and protection.”   Such an endeavor takes on added significance when one takes into account that ACA is, according to Wilson, “an evolving piece of legislation.”  In other words, while ACA was signed into law by President Obama in March 2010, many of its provisions will be implemented in stages.   Thus far, small business tax credits to help independent business owners pay for their employees’ coverage, federal matching funds for states that expand state Medicaid coverage to more of their residents, help for older adults who hit their respective coverage gaps for prescription drugs (aka “donut holes), increased efforts to investigate and prosecute healthcare fraud, help for Americans with pre-existing conditions, allowing young adults to be eligible to remain on their parents’ insurance plans up to the age of 26, and free preventative care are just some of the provisions of ACA already in effect.

For Pamela Roshell, a Regional Director for the United States Department of Health & Human Services and a panelist for the Miami stop of the tour, the need for ACA is simple:  millions of Americans were and remain without health insurance.  In a system that “favored providers, not consumers,” says Roshell, minute errors in the filling out of a health care application was often used as grounds to rescind or revoke insurance for unsuspecting people.    Another big problem that ACA seeks to address is the disproportionate amount of one’s healthcare premiums being used to pay for other things besides actual service delivery.   That is addressed, says Roshell, via the “80-20” rule which stipulates that at least 80% of what one pays in premiums must be spent on actual service deliverables.

Miami-Dade County Commissioner Audrey Edmonson, who was instrumental in bringing the health care reform tour to South Florida, sees the need for increased information as a big need in the community – especially for at-risk segments of our community such as older adults, people of color especially Haitian residents, and women as a whole.   At the core, however, is what she calls a lack of “healthcare awareness.”

“Now is the time to be educated,” says Edmonson, about what ACA is and what it means to the residents of Miami-Dade County.   “All of us need to be informed.”

Brown sees universal healthcare as being of the utmost importance and cites historical precedence as the source of the NCNW’s determination.   NCNW founder Dr. Mary McLeod Bethune herself recognized the need for healthcare for everyone, says Brown, as she retold the story of how Bethune responded to the turning away of a Black student from a segregated hospital in Daytona Beach (where she had already founded what is now Bethune-Cookman University) by starting a hospital herself.  “Healthcare has always been at the forefront” of the mission of the NCNW, Brown told the Miami Times, “[and] we always try to maintain our mission.”

For organizers such Brown, Edmonson, and Wilson, feeling better is bigger than politics.  Or, as Wilson said while delivering opening remarks to those in attendance at FMU, “everybody gets sick.”