'A Unique Aspect' - An Interview with MDPD’s Director Patterson

In the Social Work Dictionary, Dr. Robert Barker defines resiliency as “the human capacity … to deal with crises, stressors, and normal experiences in an emotionally and physically healthy way.”   That definition seems be embodied in the person of Miami-Dade Police Department Director J. D. Patterson.   Exhibiting resilience and channeling it into excellence has served Patterson well, dating back to long before he began his 28 year career with one of the United States’ largest police departments. 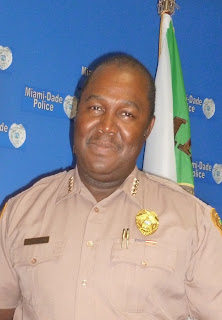 “I was brought up in a violent family,” Patterson shared with no hesitation during an interview at MDPD’s headquarters in Doral.  “I come from a dysfunctional background – still do as a matter of fact,” said Patterson, who is the only person in his immediate family to have graduated from high school.   That dysfunction was so much a part of Patterson’s life growing up in Brownsville that his first research paper was a report he wrote on alcoholism – as a fifth grader.

Indeed, that “effective coping style” that Barker says is resilience allowed Patterson develop a keen awareness of human beings and how they express their needs which explains a lot about his approach to law enforcement.  “I realized that violence was not very productive,” said Patterson who described himself as someone who “would have been [labeled as] ‘at-risk’” as child growing up in Miami.

Patterson, however, made no apologies about his experiences.  In fact, he seems to embrace them.   “It makes my empathy a little stronger,” said Patterson, “especially towards children.”

Because he sees both physical and verbal violence as “destructive to everything,” Patterson said that “violence is not acceptable at any time.”   Patterson recognizes the “emotional nature of violence” and the universal human emotion of anger but there are alternatives to violent expressions of anger.  “We all get mad,” commented Patterson, “but if they don’t want to talk about a problem, they should go to jail” if people resort to violence.

Patterson is not, however, a proponent of an exclusively punitive approach to law enforcement.   “I see crime as a symptom, an indication of a problem,” said Patterson, who added that “violence is our greatest problem.”  He is particularly concerned about violent crimes among Miami-Dade County’s youth.   “We have to break the cycle” of violence, said Patterson.

Patterson spoke about alternatives to violent expressions of emotion such as organized sports programs and professional therapeutic interventions.  He also mentioned plans to organize town hall meetings to explore and discuss different resources for alternatives to violence in the community. 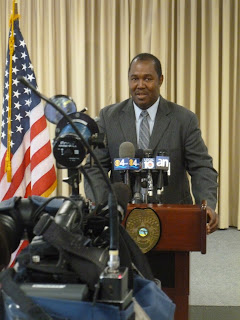 Still, Patterson’s window for getting things started under his watch is a small one.  He had already submitted his paperwork for retirement when he was named acting director to replace outgoing director James Loftus last autumn (“I was hoping he’d stay longer,” said Patterson of his predecessor).   “I’m not going to be here forever,” said Patterson who is scheduled to retire in three years.  Patterson added, that “the reality is that the department needs to start developing young future leaders,” especially with so many of his colleagues that started with him during a hiring boom in the early 1980’s will retiring with him.

With a finite period of time before he, too, must ride off into the sunset, is there someone in the Department’s current ranks that can successfully
succeed Patterson?  “I want to believe that,” replied Patterson.    “I think that some leaders are born and some leaders are made.”

Who could that future director be?  Patterson was too focused on the tasks before him to even begin to speculate on who that might be but he did speak of an interesting possibility for Miami-Dade County.   Describing himself as “the right man at the right time,” Patterson added that he thinks that “there will be a right woman at the right time.”

Given the time he has to do his job as director, Patterson’s sense of urgency to get involved and make progress appears to dovetail with the community’s hurry to address pressing issues of crime and violence.   “I’ve been an intervener all of my life,” said Patterson who is also a minister as well as a cop. “It is a unique aspect to what I do.”

*please click here to read the printed version of this article.

Posted by Veguero Viajero at 5:00 AM

The internationally-renowned Creole Choir of Cuba finished its 11 city U.S. tour in Miami Beach earlier this week with a performance that celebrated music and recognized bridges, The show may have also fostered unity among two of South Florida’s largest ethnic groups:  Cubans and Haitians.

Comprised of residents from the Cuban city of Camagüey, all of whom are of Haitian ancestry, the Creole Choir of Cuba had been on tour promoting their latest CD, Santiman.  Kelso Riddell, tour manager for the group, said that the group started the tour on February 18th and had performed in places like Chicago, Newport News, as well as Cornell and Clemson Universities.    For the Creole Choir’s founder Emilia Diaz Chavez, the ambitious trip was “an extraordinary experience.”

“It gave us the possibility of getting to know different parts of the United States,” said Diaz.

The people that came out on a balmy March evening to see the Creole Choir perform were diverse but were mostly either Haitian or Cuban.

Jan Mapou, owner of a bookstore in Little Haiti and an active cultural force in South Florida’s growing Haitian community, came to see old friends.  Mapou first met the group during a trip to Cuba, where some figures estimate that approximately one million Cubans speak Creole, in the late 1990’s.   A few years later, the Creole Choir – then known by its original name, Desandann – came to perform in Miami.  “It was the first time that the Haitian community [in Miami] discovered them,” said Mapou.

For other Haitians like Yanick Perodin, Sunday’s show could not be missed.  Describing the performance as “very special to us,” Perodin said that the Creole Choir of Cuba and their music is “a part of our culture.”  Sentiments like Perodin’s are validating for Diaz and the rest of the group.  “We feel like we are completing our mission by promoting the beautiful songs of our ancestors,” said Diaz.

The exchanges between the people of Cuba and Haiti are nothing new.  Inhabitants of both countries frequently crossed the narrow 45 mile Windward Passage long before the arrival of Christopher Columbus.  The first recorded interaction between Cuba and Haiti came in the earliest day of the Spanish conquest when the legendary Taino cacique, or chief, Hatuey departed from Haiti to warn his brethren and compatriots in Cuba about the dangers of the strange men with hairy faces and shiny head coverings.  The process accelerated during the Haitian Revolution at the end of the 18th century when French landowners fled to Eastern Cuba with their families and the human beings they kept as slaves.  The next big wave of Haitian emigration to Cuba came during the 1920’s and 1930’s when over a quarter of million Haitians fled the U.S.-occupation of their country.

Yolande Thomas, who is a leading member of the local Haitian folkloric group Sosyete Koukouy with Mapou, said that the contact between Cubans, Haitians, and Cubans of Haitian descent was interrupted significantly during the years of the Duvalier regime in Haiti.   Nonetheless, said Thomas, the Creole Choir’s music is “very deep in Haiti,” thanks in large part to the legacy and lessons of their parents and grandparents who grew up in Haiti before moving to Cuba.

For Cubans in the audience like Ileana Casanova, the work of the Creole Choir of Cuba is important because “it is a bridge that connects, people to people.”

Singing songs in Spanish and Kreyol and interplaying rhythms like konpa, merengue, and guaracha, the Creole Choir entertained the crowd that grew as the sun set slowly over the palm trees surrounding the North Beach Bandshell.   Concert-goers spent most of their evening on their feet dancing and singing in unison to call-and-response chants and enjoying the revelry of the marriage of two of the Caribbean’s most intriguing cultures.  As an additional homage to their final night in the U.S., the group offered “a gift” for those in the audience that did not speak either Kreyol or Spanish:  a mesmerizing acapella cover of the Nat King Cole classic, “Unforgettable.”  The evening closed as the choir filed off of the stage and into the audience singing Miguel Matamoros’ poignant “Juramento” (If love makes one feel deep pains / And if condemned to live in my misery / I'd tell you, my love, that for your love / Even my blood would boil in my arteries).  Few were the dry eyes among those present.

Though not surprised by the enthusiastic reception the Creole Choir received, Diaz was pleased by the outpouring of affection.  “Language is not a barrier,” she said. “Music is universal and it reaches all of our audiences.”
Posted by Veguero Viajero at 5:30 AM