In a political landscape where well-heeled super-interests seem to have all of our elected officials’ attention, the thought of a regular citizen, an average Joe having the mayor of a major city come to speak to a group of senior citizens seems to be merely the stuff of which Frank Capra movies are made.    But things are not always as they seem and, yes, an average Joe can make things happen –even when his name is not really Joe.

James Stubbs, of the Edison Towers Tenant Association in Liberty City, spent most of the past summer – about three to four months – lobbying to get the mayor and the police chief to come speak at one of that group’s monthly meetings about concerns over crime in the area.  Specifically, the residents wanted to press directly for the assignment of a permanent, full-time beat cop to patrol the stretch of NW 7th Avenue that runs between 54th and 62nd Streets.

“We’ve had quite a few robberies,” said Stubbs.   A retired Miami police officer, Stubbs ran through a list of recent crimes that have affected the area:  a bank heist, a stabbing at a bus stop, a smash & grab theft at a gas station, and even the shooting of an off duty police officer during a robbery – outside of his church.

Stubbs’ efforts were partially successful as Miami Mayor Tomás Regalado came to last week’s resident meeting at Edison Towers but not Police Manuel Orosa (who had to cancel shortly before) to address those concerns.  Regalado brought with him a few members of his staff and two police commanders in lieu of the chief (Commander Dana Carr from the Model City NET Office spoke with residents, too).  The importance of the chief’s participation was simple:  “Only the chief of police can authorize a beat cop assignment,” said Stubbs.

Mayor: ‘I will talk to the chief about the beat cop’

Regalado wasted little time in answering the biggest question of the evening.  “Yes! I will talk to the chief about the beat cop,” declared Regalado.  “People are complaining about it and the police department is doing something about it.”

“I guarantee to have more officers reassigned from desk jobs and more new hires will be deployed,” promised Regalado to the Tenants’ Association.  “In the next weeks, there will be more police visibility here.”

For people in attendance like Angela Kelly, Vice President of the Tacolcy Economic Development Corporation, the mayor’s guarantee was good to hear but, as she told Regalado, “it takes commitment.”

Citing both history (“we used to have a beat cop here”) and basic dollars and cents (“we would like to continue to develop the economic base for the 7th Avenue Corridor”), Kelly echoed what Stubbs had alluded to at the beginning of the meeting about allocation of resources.   For example, the area formerly known as Wynwood and now dubbed the Midtown Design District has two beat cops around the clock. “I don’t understand how other communities have beat cops and we don’t,” asked Kelly. 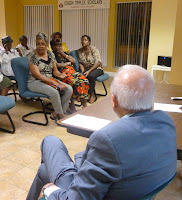 Regalado’s message – and promise – were what residents wanted to hear.   “Let us try because we [Chief Orosa & Regalado] are trying to work with all residents,” said the mayor.   “We are working for the present and the future.”

And does Regalado have confidence that Orosa will back up his pledge?  “I trust him,” said Regalado.

*To read the print version of this article, please click on this urlink.
Posted by Veguero Viajero at 4:02 AM