The hearing to review the demotion earlier this year of Miami-Dade County fire fighter Brian Beckmann for derisive comments he posted online earlier this year has been set for January, an official with the County Attorney’s Office informed the Miami Times.

William Candela said that Beckmann’s appeals hearing to reverse his May 14, 2012 demotion from Captain to fire fighter as a result of a rant he posted on his personal Facebook page in which he disparaged the judge in the Trayvon Martin murder case as well as African-Americans in general  will be on January 14, 2013.    “That date has been set in stone,” said Candela who will argue on behalf of Miami-Dade County to uphold that disciplinary action.

The January hearing, which will be open to the public, is the latest episode in a continuing story that started last spring when Beckmann’s comments were originally posted online.  Although the comments were removed and the facebook account was soon removed altogether shortly thereafter, the image of the page posting was already captured and was published by Joy Reid of The Grio Report igniting a firestorm for the Department and County.

For retired county employee and local activist William Clark, who along with others pushed for Beckmann’s termination, there is still work to be done specifically to be called as witnesses for the County to testify against Beckmann.   Clark said that he believes that “victims are going to be absent. “  He said that he and others in Dade County’s Black community “are the victims of [Beckmann’s] remarks” because fire fighters are “first responders who go straight to the homes of the people.”  Hence for him and others who question Beckmann’s commitment to protect, safety in the hands of someone like the embattled fire fighter is a concern.   “I don’t want to take a chance with this guy saving me,” said Clark of Beckmann.

Simply put, said Clark, “we want the county attorney to subpoena the victims.”

When asked about who will be called as witness, Candela said, “I am going to make the determination.  I have not made it yet.”  Candela said that such hearings are “really common” in a workforce that has “27,000 county employees.”  These hearings involve a union lawyer, a county attorney to argue opposing sides of the case, an independent arbitrator to hear the case, and witnesses called by each side.

Adding to the intrigue in the case, the Miami Herald published redacted copies of Miami-Dade County documentation relating to the case [please see below].   For example, in a county memorandum titled “Findings of Fact Report” sent by Dave Downey, Assistant Chief of Operations to Chief William Bryson on May 11, 2012, Beckmann denied that he wrote the statements that set off the controversy. 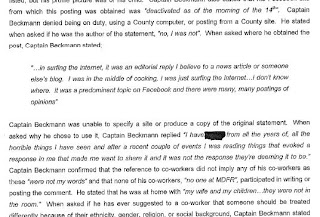 *To read the print version of this article, please click here.
Posted by Veguero Viajero at 9:35 PM


It has been said that the African-American male is the United States’ most endangered species.  With headlines and lunchtime conversations about low graduation rates and high incarceration rates, not enough jobs but too many drugs, it is hard for many not to be discouraged.  Yet in every cloud, there is a ray of sunlight fighting hard to break through and shine.

The City of Miami Police Department’s Police Athletic League (PAL) has, according to Lieutenant Bernard Johnson, “been around for many years.”  Recently, however, PAL’s activities and importance have grown.  The Miami Police’s PAL just finished its second year of offering Pop Warner football to area youth and the number of children either playing football or cheerleading doubled to about 300 participants.

All of this comes with news about shootings, gambling, and drug use at youth football games in other parts of South Florida.

What is the difference? Simple, says Johnson, “we have direct police involvement.”  The coaches for the PAL are all police officers with the Miami PD. “That makes our program safer because cops always around.  This built-in “security” is something that Johnson says is important to the parents of the children participating in the football, basketball, cheerleading, karate and other programs offered by PAL.  “Our parents are very happy and very satisfied with the structure,” says Johnson.

GreslynJoseph, mother of PAL participants Trent and TajahJoseph, agrees.  “For me the biggest appeal is the sense of security and trust.”  Joseph says she researched other parks and was initially impressed by the respectful nature of the interactions between the parents and coaches at Curtis Park, where PAL practices and plays its football games.

But more importantly for the coaches and parents like Joseph, says Johnson, “our kids are building a relationship with police officers as role models.”  That relationship transcends the playing fields as the Miami PAL works with students in the classroom, too.   Johnson, along with fellow police officers like Majors Craig McQueen andDelrish Moss andOfficers Kelvin Harris andStanley Jean-Paul  are “setting up a better tracking system keep up with [the student-athletes’] grade point averages,” says Johnson.  For the PAL officers, it is all a big part of keeping Miami’s youth in the park and out of trouble.  In fact, PAL’s motto is “building playgrounds, not prisons.”

“Our goal is to help raise the GPA” of the young athletes that come to the PAL, says Johnson, who proudly talked about PAL’s “tutorial programs, direct counseling, and peer facilitators.”

The fast growth of the program has come mostly from “word of mouth” as more and more families are finding out about the PAL and all that it offers. Joseph says that some parents drive from as far away as Ives Dairy Road to bring their children to Curtis Park.Johnson, however is quick to point out that “there are other great programs out there” and he hopes that, if nothing else, the successes of the PAL can serve a model for other programs that want to help children.

But the biggest indicator of success for any youth-focused program in a major metropolitan area is its impact on the overall lives of its participants once they go home.  In short, does the PAL save more Black lives?  “Yes,” says Johnson. “We’re giving these kids an alternative to criminal activity.”

“Supervised youth are always going to be less likely to get into trouble,” explains Johnson, “and more likely to pursue more positive activities.”

For Joseph, the value of this still-growing program goes deeper than skin color: “the PAL is saving young lives.”

*To read the printed version of this article, please click on this link.
Posted by Veguero Viajero at 5:30 AM