As the historic milestone commerating the 50th anniversary of the March on Washington dawns in just days, leaders in Miami gathered to stage a pre-march against the backdrop of evidence that little has changed for Black America since 1963. 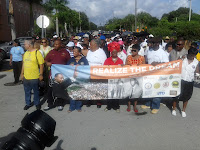 Dr Reverend Carl Johnson, pastor of the 93rd Street Community Baptist Church which hosted the event, declared during the opening prayer for marchers that “we march for justice, jobs, peace, and freedom. Symbolically, we’re marching to tumble down walls.”

State Representative Cynthia Stafford acknowledged the contributions of people who participated in the 1963 march.   “You were marching for me when you marched for jobs, justice, and freedom.”

The march participants, who numbered approximately 200 people, began the procession with those at the front of the group singing “We’ve Come this Far by Faith” while only murmurs , good-natured laughs and Sunday morning gossip cascaded over the shuffle of feet at the rear.  The marchers paraded past abandoned houses and empty lots that dotted the landscape amidst proud houses and manicured lawns in North Central Miami-Dade County, many holding open umbrellas for relief from the strong August sun that was beating down upon them, some in their Sunday best, others in t-shirts and shorts, but all moving forward. 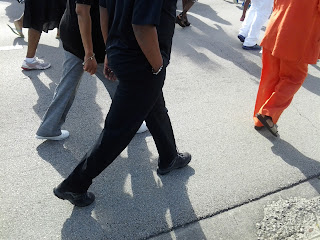 Goodwill Ambassadors from Miami-Dade County were passing out water at stations along the way to provide some relief for participants on a humid morning.

Also, PICO United Florida hosted a community prayer and march at Greater Bethel AME Church  in Overtown this week.  The event at Greater Bethel was a bon voyage ceremony for a tour that is scheduled to make stops and hold similar events along the way to Washington, DC in Sanford and Orlando, Florida, Atlanta and Durham, North Carolina.   The bus tour en route to this week’s March on Washington also pledged calling attention to ongoing civil rights and economic troubles for minorities in the United States.

Activist Ron Fulton, an uncle of the slain Miami Gardens teenager Trayvon Martin, participated in the march at the 93rd Street Baptist Church to fulfill a promise.  “I made a commitment a long time ago to do everything I can do to bring equal and fairness to our justice system and our community.  I’m hoping that this will be the start of civil rights and economic change.”

Speaking of the large divide between what he called the “haves and have nots,” Fulton expressed concern over possible backlash to any change that may come from entrenched sectors of the country. “It’s already dangerous because certain people don’t want to change.”

Algernon Austin, a researcher for the Economic Policy Institute, published figures that lends credence to Fulton’s statements. Those figures are sobering.

Additionally, wrote Austin, the same relative percentage of black grade school students (approximately 75%) attend “majority black schools” today as they did over forty years earlier.  Most of these de facto segregated schools are not on equal footing in terms of resources as schools with a majority of white students.

Austin’s research also revealed that unemployment figures for both blacks and whites have gone virtually unchanged since 1963, hovering at a 2 to 1 ratio.  The Economic Policy Institute (EPI) study also showed that the 2012 jobless rate for blacks (14%) is higher than the unemployment rate for the entire United States during the Great Depression (13%).

But having a job has not necessarily been good news either.  Austin’s work looked at how the past half century has not shown improvement for black workers in lower paying jobs.   The EPI report found that “after adjusting for inflation, the minimum wage today—$7.25—is worth $2.00 less than in 1968, and is nowhere close to a living wage.”

It was in this context that the march was held in Miami as a precursor for the main celebration of the important civil rights milestone in Washington, D.C.

Miami-Dade County Commissioner Audrey Edmonson and others pointed out that there are still battles to fight to achieve true equality and justice in the United States.  “We still need to fight and get together.”

Melonie Burke, a representative for Edmonson’s colleague on the Miami-Dade County Board of Commissioners, Jean Monestime, echoed that sentiment.  “It doesn’t stop.” 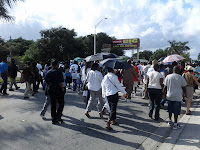 State Senator Dwight Bullard made the drive up from his home district in South Dade to join the rally held in front of 93rd Street Community Baptist Church and offered contextual perspective.   “Let’s understand what we’re doing here.  We represent the manifestation of that dream so our commitment is to understand that our job is not done.”

Those comments about what Stafford referred to as a “dream deferred,” borrowing from poet Lorraine Hansberry, harkened back to the almost prophetic analysis of the 1963 march by Malcolm X.    In writing in his autobiography about the event and describing self-serving  individuals within the black community at the time (“the status seeker”) and the machinations of insincere whites in power at that time, X said somberly that “the black masses in America were--and still are--having a nightmare.”

This weekend in Washington, D.C. marks a second chance for the leaders and people of the United States to get it right and realize the dream made famous by Martin Luther King on the steps of the Lincoln Memorial.

*To read the published version of this article as printed in the South Florida Times, please click on this urlink.
Posted by Veguero Viajero at 5:30 AM