NORTH CENTRAL MIAMI-DADE – Efforts to create a new city out of a large area of unincorporated North Miami-Dade County are running into new obstacles.

After waiting for a decade-long moratorium on incorporation to be lifted, supporters of the North Central Dade Area Municipal Advisory Committee (NCDA-MAC) say that neighboring municipalities are making moves to take annex key areas of the proposed city. 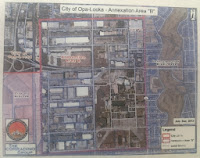 The area, listed in Opa-locka city records as “Annexation Area B,” sits in the northwest corner of the incorporation area originally outlined by NCDA leaders several years earlier.

Opa-locka’s plans to annex the area are not mere speculation.  “They started their process and they are moving forward with it,” Gardner said.

The motivation for opalocka city officials is simple: increased revenue. According to an annexation report published by the City of Opa-locka, acquiring the land would "expand city boundaries" to include commercial and industrial properties.  According to the report, this expansion is expected to generate revenue via "impact fees for development, code enforcement, [and] fines" in the annexed areas.

Mack Samuel, a member of the NCDA-MAC, said the area for Application B, which is primarily commercial, with warehouses in abundance, is estimated to be worth $266 million in taxable value annually – which would severely deplete the tax base of the proposed city.   Because there are no known residents living in that area, there is little to hinder Opa-locka – or other areas – from annexing it.

Ed Lopez, president of Antilles Freight Corporation, said that Hialeah has also expressed in interest in acquiring the area that Opa-locka is trying to annex ahead of any incorporation by the NCDA-MAC.  Calls to the City of Hialeah were not returned for confirmation before press time.

According to the Miami-Dade County Charter, a referendum on annexation or incorporation is not needed if less than 250 people live in the area in question.

Alarmed by the threat to their plans to create what would be Florida’s second-largest majority-black city after Miami Gardens, NCDA leaders addressed the Opa-locka City Commission in late July. 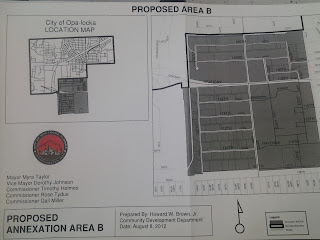 “Our position was to inform them that our process has been ongoing for the past 10 years.  We wanted to make sure that they were aware of that. Our desire was for them to put the brakes on it,” Gardner said.

Gardner and Mack were not alone in opposing the annexation plans in the Opa-locka Commission chambers.

Some business owners in Application Area B also spoke out against the proposal.  Lopez said that the business community in Gratigny Industrial Park, where his business has been since the late 1990's, was not at all happy with the plan to bring them into Opa-locka.  The biggest concern cited by Lopez would be a spike in property taxes for him and his neighbors.   According to Miami-Dade County records, the millage rate for unincorporated Miami-Dade County – which the business are now paying – is under $2 for every $1,000 or taxable property value, whereas the rate for Opa-locka is just above $9, second-highest in the County behind Biscayne Park ($9.50).

“It doesn’t make any economic sense to be in Opa-locka,” Lopez said.

Lopez, Gardner, Mack and Felix Lasarte, an attorney representing Lopez and other business owners, all doubted that the anticipated steep increase in taxes will yield a corresponding improvement increase in services if the Opa-locka annexation effort succeeds.

Chiverton pointed out that the area is already being served by the Opa-locka police department. He acknowledged what he called “a cross-section of concerns” presented to the city commission related to cost and financial impact for local businesses. Water and sewage services for the area would picked up by Opa-locka if the annexation is approved.

“What services are they providing to offset” the increase in taxes, asked Lopez.   “They promised one more police officer but that won’t make a difference.”

For Opa-locka city leaders, the move has benefits for residents,  Chiverton said. He sees the proposed annexation as a way to create jobs by attracting businesses with manufacturing and assembly specialties.

“The interest of the city is to complete what the commission approved,” he said

Lopez disagreed, saying, “It’s going to be a ghost town.” 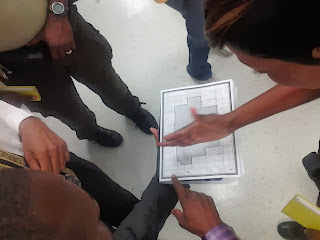 Asked if business owners will consider suing to stop the annexation, Lasarte said that “all options are on the table.”

“The property owners intend to protect themselves.  They want to have a say in the process,” he said.

The NCDA-MAC also wants to ensure that any annexation move is decided by residents.

“It is important that the area be given an opportunity to incorporate,” Gardner said.

“The citizens deserve the right to vote,” Mack added.

For the record, NCDA organizers do not yet know what its mill would be.  When asked, Lopez said he prefers that the area remain unincorporated but he had to "choose from the lesser of three evils," he'd pick Hialeah because their millage rate is 6.3.

*To read this article as it appeared in the South Florida Times, please click on this urlink.
Posted by Veguero Viajero at 4:30 AM