‘The Unsquarest Man’ – One Writer’s Homage to Albert Murray


‘The Unsquarest Man’ – One Writer’s Homage to Albert Murray


Earlier this week, I learned that noted writer and accessible intellectual Albert Murray passed away in his home Harlem at the age of 97. 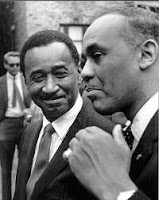 I remember Murray best for being patient with what I did not realize at the time was a rather impolite inquiry when I telephoned him at his home in 1999. I first heard of Murray after reading Dick Russell's book, Black Genius and, as an emerging writer, I wanted to reach out to the man credited with shaping the art of Ralph Ellison, whose novel, Invisible Man, made a huge impression on me.

Mr. Murray was puzzled, almost annoyed that I called him out of the blue and not happy with the ease with which I found his number (in the white pages) but he must have sensed my true intentions and was very generous in offering feedback and advice in what turned into perhaps a thirty minute telephone conversation.


I remember being struck by one recommendation in particular that he gave to me: read William Faulkner.   Not knowing much about Murray, I was thought it unexpected that a black intellectual who was an eyewitness to some of the great milestones of the African-American 20th century would suggest that the work of the writer that created the fictional Yoknapatawpha County was a great primer for an aspiring writer.


O the things I had yet to learn about Albert Murray.

Murray was a jazz man with a blues background in musical aesthetics and his curiousity was perhaps matched by his ability to transmit what he so acutely observed and remembered.  A prized possession of mine is a book, a history of jazz, the printed accompaniment of Ken Burns’ 2000 documentary Jazz,  that uses Murray's descriptions and depictions of artists we now know as jazz legends as priceless insights into the excitement of being there when live music is born.   In the opening of that book, Murray says that live jazz is “the creative process incarnate.”

I think that it is fitting that I was reminded of that just one day before he died while enjoying the music of vocalist Brenda Alford and other great artists at the Avocado Jazz Festival in South Dade.


An essayist, a fiction writer, and a poet, Murray also guided the shaping of the craft of the writer Stanley Crouch and musician Wynton Marsalis with whom he worked to establish Jazz at the Lincoln Center.


Born in rural Alabama and raised in Mobile by his adoptive parents, Murray’s excellence as a student there earned him admission to what was then the Tuskegee Institute in the late 1930’s.   There he met Ellison and the woman he would later marry, Mozelle Menefee.    It was at Tuskegee that Murray read works by authors such Faulkner, James Joyce, Sinclair Lewis, Ernest Hemingway, and others.

Murray, who is survived by his wife and their daughter, Michéle Murray, once wrote that “when the Negro musician or dancer swings the blues, he is fulfilling the same fundamental existential requirement that determines the mission of the poet, the priest and the medicine man.”

In his 1976 book, Stomping the Blues, Murray made the argument that the blues are the essential element to the music known around the world today as jazz.  His appreciation and respect for the blues as an art form was unwavering.    “The blues is not the creation of a crushed-spirited people. It is the product of a forward-looking, upward-striving people.”


Another of Murray’s protégés, the academic Henry Louis Gates, Jr.'s famously said of Murray in a piece he penned for the New Yorker magazine that "This is Albert Murray's century, we just live in it."


The Real Tracy Fields, host of WLRN-FM’s “Evening Jazz” used a well-known description of Murray by Duke Ellington to pay tribute to the writer on her program’s social media page this week.  Ellington said that Murray was “the unsquarest man I know.”


Murray is one of the less visible of the United States' gifted minds and, perhaps now with his demise, he may become even less visible but as his protege Ellison showed us, an invisible man is still a man and a man is important.

*To read the printed version of this obituary as published in the South Florida Times, please click on this urlink.
Posted by Veguero Viajero at 4:30 AM