After a quiet, rainy night in which little if any public reaction to the non-guilty verdict handed down in the George Zimmerman case in Sanford, Florida was evident anywhere in Miami-Dade County, an evening vigil was held in downtown Miami in memory of Trayvon Martin, the Miami Gardens teenager who was killed during a nighttime encounter with Zimmerman in February 2012.    Organized in part by Dream Defenders and the Miami Workers Center, the event, which was part rally, part revival, was held at the Torch of Friendship on Biscayne Boulevard.

Flanked by statues of Ponce de Leon and Bolivar, the vigil was held at the small park dedicated to the memory of assassinated U.S. President John Kennedy and was attended by a diverse group of people spanning differences in age, ethnicity, gender, et cetera.   It began under grey clouds filled with rain with a moment of silence for Martin, his family, and “other victims” of violence.  Thereafter, speakers lashed out at the verdict and what many in the crowd of almost 200 people felt was a troubling sign for the social fabric of the United States.

Vizcardo said that the vigil was organized just hours before the verdict was announced late the previous night.     The group, which was organized in different cities in response to the death of Martin last year, was also active, according to Vizcardo, in bringing pressure to bear on Sanford Police and the Seminole County state attorney to pursue charges against Zimmerman.

Whitney Maxey [confirm] of the Miami Workers’ Center said that “this case was just an example of how communities of color are constantly trampled.”

Tiara Miles, moved to Miami from Chicago earlier this year.   Miles was living in Louisville when news of Martin’s death first surfaced last year and attended rallies there.  Although she is enjoying her new life in Miami, she admitted that the verdict made it an “embarrassment” to live in Florida.

“What does that say about that state of Florida?” 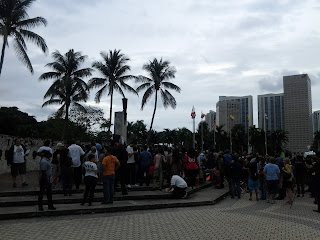 Speaking to the growing group of concerned residents and curious tourists and random passerby, Marc Luzietti of One Struggle yelled, “There is a new Jim Crow today!”

Christian Demeritt of Miami also spoke the crowd. “I don’t want this to die down,” she said, “because it’s going to happen again.”

State Senator Dwight Bullard (D) saw the vigil as an important opportunity for “coalition-building” with the hope that it could affect “real, positive change.”

Miles agreed.   “[The verdict] was “disheartening. It divided a lot of people.” The verdict, in fact, was a bigger concern for her than any worries about violence in response to it. “I didn’t even think about [civil disturbance].”
Michelle Madison, a local entrepreneur, was also moved by “the significance of the verdict [and] what it means for kids and justice.”

Bullard said that he was “happy to see that our community has gotten to a point that we can move past being angry.” 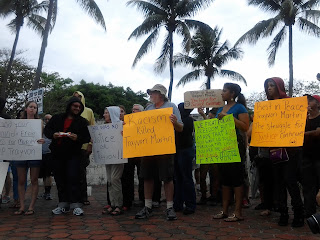 Light rain began to fall just as crowd prepared to march to a couple of blocks up Biscayne Boulevard to the Freedom Tower just across the street from the American Airlines Arena, chanting “Peace for Trayvon!”   The chants grew louder as they neared their historic destination.   “What do we want? Justice!”

When they arrived at the Freedom Tower, the group climbed defiantly on its steps as the rain fell stronger and the volume of the chants increased.   “I am Tray-von!”

Speakers called for a special legislative session to repeal the Stand Your Ground law that has been at the center of this case since last year. Demeritt, who said that the vigil was the first protest event she had attended since college, sang, with many singing with her.

For organizers and supporters alike, the vigil was meant to be the catalyst for a paradigm change.  “We want to see a change,” said Maxey.   She and Bullard both spoke of what she called “bigger forces at play.”

“There’s a need for people who understand,” said Miles who said she felt “fortunate” to be present at a moment of important significance. “We need to educate people on these social issues.”

*To read the version of this article as printed in the South Florida Times, please click on this urlink.
Posted by Veguero Viajero at 8:30 PM